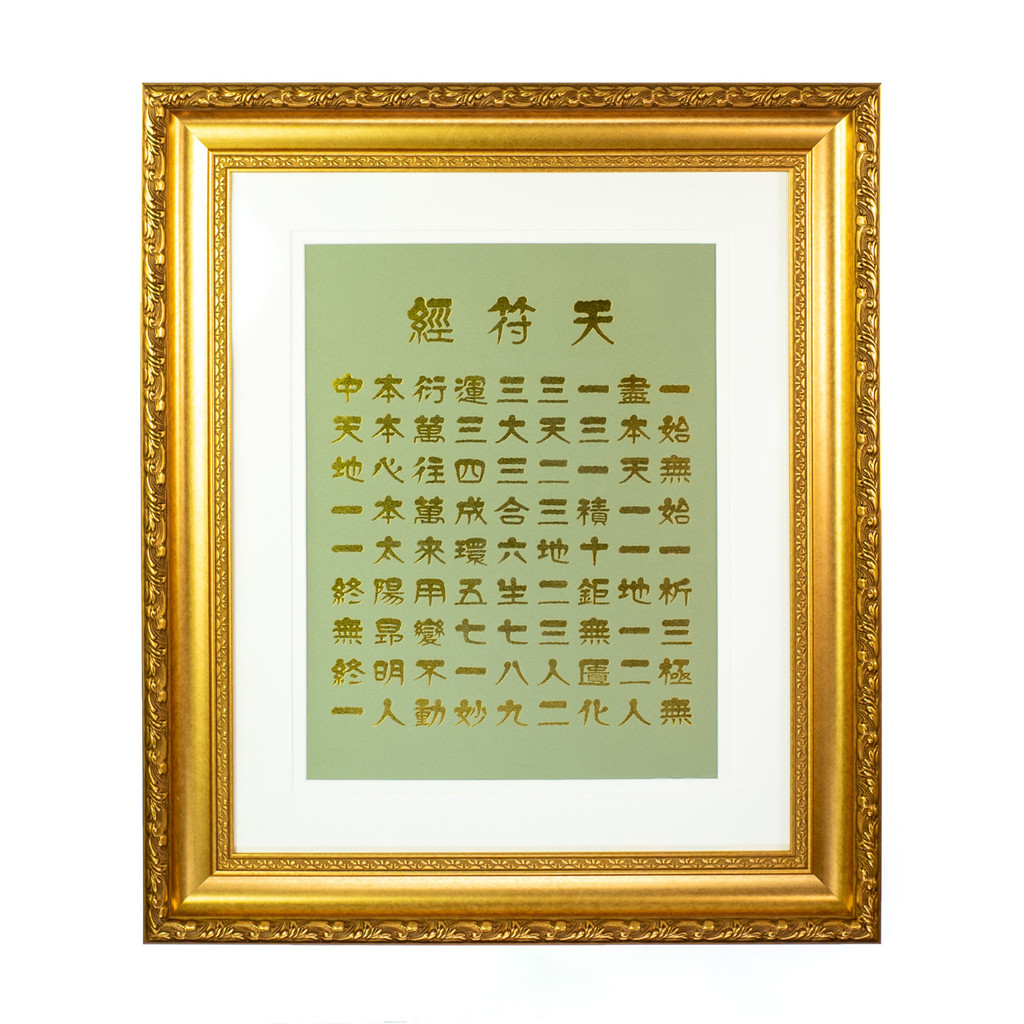 *This item is MADE TO ORDER and will take longer to be delivered than usual. Allow at least 4 weeks for delivery, but conditions may change due to COVID-19.*

Hanging the Chun-Bu-Kyung at home or in the office provides purifying energy by itself, which harmonizes positive and negative energies of the surroundings. It also serves as a beautiful decoration.

The ChunBuKyung is one of the oldest known scriptures of the Korean people. This ancient Korean spiritual text is said to have been created by a sage who realized his own enlightenment through his Shinsundo practice, through which he gained insight into the realities of life and death and the operational flow of the universe. Some estimate this occurred around 9,000 years ago in the ancient community of Han Kuk, and was orally handed down until around 4,000 BC, when it was first put into writing in Nocdoomun characters, which resemble a pattern of deer hoof prints. The contemporary version was translated into the current Chinese letters by Chiwon Choi, a reknown scholar from the Silla dynasty (57 BC - 935 AD) during the Three Kingdoms period of Korea.

Each letter has its own energy with all 81 letters combined there forms completion of energy that can bring you purity. The letters of the Chunbukyung are an expression of the principles of the Universe in perfect harmony, and they can allow the energy of any space become more harmonious.

The real frame can be different!

$41.81
Making a powerful and profound form of meditation, the ChunBuKyung is a 9,000-year-old Asian scripture composed of 81 characters. It speaks of the laws and process of creation and of how everything...
View Product Add to Basket
Add to Basket

$18.95
The Chun Bu Kyung is an ancient Korean sacred text that conveys the origin of the universe and humanity's place in it. Contemplate the meaning and purpose of your own life as you use this elegant...
View Product Add to Basket
Add to Basket

$19.95
Chun Bu Kyung is a sacred Korean text that is more than 9,000 years old yet still has lessons for us today. Pick pearls of wisdom from it with this beautiful and inspirational card deck. Each card...
View Product Add to Basket
Add to Basket

$9.99
A basic calligraphy instruction workbook with focus on writing ChunBuKyung. Practicing Calligraphy is one way of getting into deep meditation. While practicing calligraphy, the mind calms down and...
View Product Add to Basket
Add to Basket